Urban Conditional: Room for a view? 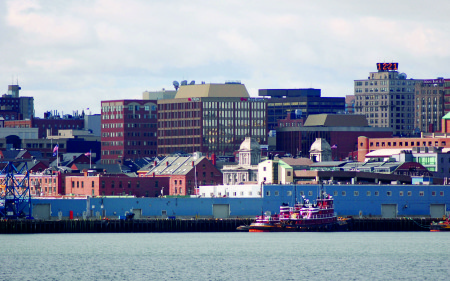 It would be a pretty boring election season if not for Question 2. The referendum, put forth by the Save the Soul of Portland group, asks voters to preserve sightlines, particularly those from a short stretch of eastern Fore Street overlooking the harbor. Fore Street sits above the Portland Co., an old industrial complex slated for development by CPB2.

The Amendment refers to specific rules and designations of a “Scenic Viewpoint Protection Overlay Zone,” but the debate has broadened beyond sightlines:

Some proponents (the “Yes” people) feel that the project will gentrify Portland’s housing supply — thus driving up prices making Portland affordable only to the very rich.

Whereas: Some opponents (the “No” people) feel that derailing the project will limit Portland’s housing supply — thus driving up prices, making Portland affordable only to the very rich.

But what is really at stake?

Passage of the referendum will add several pages to the city’s Code of Ordinance Land Use chapter to create (at least one) scenic overlay zone.

(In case you were absent that day of planning school, an overlay is “zoning on top of zoning.” Overlays add restrictions beyond the standing zoning laws. Examples include environmental protections, historical districting, and bans on night clubs in residential neighborhoods.)

When boiled down, the bill essentially does three things:

First and foremost, the Amendment would not allow anything to be built on the Portland Company complex that would rise above Fore Street or would obstruct the current sightlines.
Voters are being asked to choose whether the public benefit of the view outweighs the public benefit of the proposed development. While the views from the side streets are already protected by law, what is at stake is the view from along Fore Street. Although property owners have the most to lose when it comes to sightlines, pedestrians can peer through a fence to view the harbor and South Portland (why they would take in the views there as opposed to up on the prom is another matter).

On the other hand, a revitalization of the site will preserve historic buildings; improve access to the waterfront (especially from Munjoy Hill); improve the trail network; and will add activity to the area. By allowing a denser development, the project will create hundreds if not thousands of decent jobs; add hundreds of thousands of dollars to the annual tax base; and promote further economic development.

2. The Amendment would create a Scenic Views Task Force (typically of elected officials, city staff and appointed members) to create more overlay zones. In other words, it creates universal “don’t block my view zones” that supersede existing zoning laws. The task force would also be able to receive requests for additional overlay zones. These requests would be submitted by “twenty members of the general public, or by the owner of an affected property.”

Essentially, this would create a mechanism for nearly anyone (although it favors property owners by a factor of 20, as they do not have to gather the perfunctory signatures) to petition for a new scenic overlay zone anywhere in the city. This would limit development that is currently acceptable and give just about anyone the ability to gum up the development process (thus raising costs) by triggering a scenic overlook review. This might also be seen as a vindictive neighbor clause.

However, our land use laws already provide ample transparency, oversight and public review for large projects (see City Ordinance; Chapter 14, pages 692-702, if you are interested).

3. Property Owners seeking a Zoning change would need to file plans in order to do so.

This is the “transparency” piece, but again it is a costly and largely meaningless exercise; akin to filling out your child’s college application while still pregnant.

The most recent round of City Council budget meetings lasted longer than a cricket test match. Councillors weighed school budgets; infrastructure improvements; benefits to asylum seekers; and everything else against each other as the expenses piled up against meager income. While it may be hard for many progressive people to believe that relief can be found in the wallets of a bunch of capitalists, $150,000,000 is an awfully large investment to get pumped through the city. Construction workers and nearby businesses would be among the first beneficiaries.

This is why we have a planning process. Planning sets forth guidelines and evaluates proposals with regard to public benefit. Often this entails balancing conflicting needs. But, one hopes, the processes and decisions of the planning board, staff, Council and public yield the greater good for the greater number of people.

In this case, it would be to oppose Question 2.