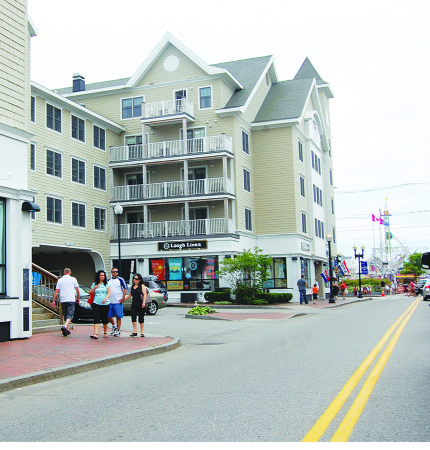 Most practical solutions are generally dismissed as being impractical. But imagine, if you will, a city where people live in dwelling units of 350 square feet or less but share common facilities like gyms, pools, dining rooms, lounges, studios, and game rooms. Where large single family houses are purposed to house multiple — or extended — families and where housing is centrally located and within easy walking distance of shops, restaurants, bakeries, grocery stores, entertainment and culture. Automobiles are rejected in favor of bicycles, trolleys, taxis, rail, golf carts, buses and amphibious vehicles. If you can’t imagine a place like this don’t worry, because you can see it for yourself. Just go to the Old Port, Peaks Island, Old Orchard Beach (tourists don’t come to Portland to visit Marginal Way), or pretty much any tourist destination. Summer visitors are the original eco-tourists.

Naturally you don’t have to go to a densely-packed city to vacation sustainably. Camps (which is our name for rustic cottages and cabins) are much smaller than most year-round homes and there is no holiday more iconic than one spent hiking and camping. Indeed, the urge to live in smaller spaces is so powerful that mobile micro dwelling units — notably cruise ships (cabins starting at 125 square feet) and other cabin boats as well as recreational vehicle — are a multi-billion dollar industry.

So while Portlanders may complain about the hotels, the follies, the crowded streets, and guffaw at duck boat riders; no one denies that walking, cycling, and public transport is healthy, relaxing, and good for the environment. In wintertime small apartments are easier to heat, and most everyone has at one point or another expressed a desire to “simplify” their lives. From an economic development perspective, the land value of downtown Portland far exceeds any similar sized parcel out at the mall — why? Because the mall devotes hectares of space to roads and parking while the city goes vertical with buildings over one story tall.

The question is not so much why do people toil away for 50 weeks of the year come to Maine only to live in tightly-packed or tiny spaces; but rather: Why don’t they do it all year long? And since dense urban fabric is more convenient and public transit is often faster, cheaper and less stressful than driving, why don’t people give up their cars along with their big homes?

Car ownership is a strong cultural trope and it is hard to parse-out the independence that automobiles give us from the dependence that we have on them. Just for fun try telling an acquaintance that they should get rid of their car and you’ll likely get a testy reply like: “I need my car to get to work.” But presented with the logical choice of being able to walk to work — or ride a $2 bus — most people can see the efficacy of forgoing a 45-minute drive twice a day. Given that the actual cost of operating a car is over $.60 a mile (plus a much greater environmental costs) the difference is striking. For example, if you drive five miles each way to work — an easy bicycle commute — it will cost you $120/month (plus parking) which is more than the cost of an unlimited monthly ride MetroCard for the vast New York City transit system.

Logic is, of course, a terrible way to win an argument. There is the perception that we “need” big homes and cars; while people who live in boarding houses, house-shares, and ride bikes to work are considered, a little wacko — or else just poor.

As the summer visitors flood off cruise ships and onto buses; Portlanders will whinge, whine, and mock them. The sad irony is that, come winter, we will be the ones piling into tour buses; living in small hotel rooms; riding bicycles on bright sunny islands while — quite unknowingly — providing a practical model for sustainable living.