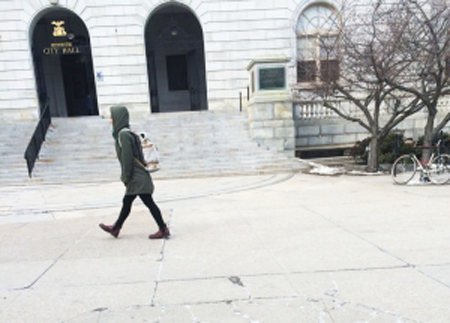 Among all the emotional political issues in our city, sidewalk-paving surfaces — brick, in particular — rank surprisingly high.

Opinions are split. One West End resident has been begging the city to restore her sidewalk to brick for years. Others would love to be rid of theirs. As with curly hair or pretty much any subjective measure of beauty, people want what they don’t have and have what they don’t want.

At a recent neighborhood meeting, a resident noted the deplorable condition of her sidewalk. Mayor Ethan Strimling said that brick’s only virtue is aesthetic; likewise, former Councilor Ed Suslovic expressed a similar opinion on a neighborhood walk. According to email records between planning staff and the developers of the Chipotle and the large Schlotterbeck & Foss building in Bayside, City Manager Jon Jennings urged developers to apply for a change from brick to concrete. It may be the only subject he and Mayor Strimling agree upon.

I am not sure why or how it was concluded that concrete is a superior paving material to brick. I suspect that when someone sees a sidewalk in need of repair, they don’t see poor installation or decades of deferred maintenance; they see a weathered material. In the case of most of the older neighborhoods, that material is brick.

I spoke with Greg Toher Jr., a master mason and landscape architect familiar with sidewalk engineering, about the problems with the construction of sidewalks.

Although there are numerous factors that send sidewalks into disrepair, among the most common are tree roots. Different surfaces react differently to roots: bricks undulate, concrete heaves, and asphalt channels. Those who think that concrete doesn’t crack have not seen the sorry condition of the curb ramp in front of City Hall, the sidewalk in front of the Portland Expo, or the newly poured sidewalk in my (technically) on-peninsula neighborhood.

On the other hand, Portland’s brick sidewalks are classic — not for their aesthetics, but for their durability. There are brick sidewalks well over 30 years old that are in pretty decent shape. The old method was to space the bricks far apart and set them in place with sand, which allows them to settle back in place after frost heaves. Brick sidewalks are easily repaired; all you need is a guy with a rake, a broom, and some sand.

The modern method is to space the bricks much closer together. And the substrate has to be carefully constructed: “I’m giving away my secrets,” Toher told me. “You start with 2” of compacted gravel, then 2” of asphalt, then a cement/sand mix, and then the brick. As it rains, the cement sets up so you don’t get heaves.”

Concrete, on the other hand, cannot be patched or repaired. It needs to be torn out, carted away, and re-poured. It is labor-, materials-, and energy-intensive; and cement plants are environmental hazards.

This is not to say that concrete and asphalt don't have their virtues. They are perfectly suitable for certain applications (asphalt is paired nicely with granite curbs), but they should not be used to replace a useful, attractive, and historic material on the basis of being better or safer, because they are not.

In a memo to the City Council, Portland Director of Planning and Urban Development Jeff Levine quoted costs per square yard of asphalt, concrete, and brick at $50, $115, and $150 respectively. He also noted the importance of brick driveways on brick sidewalks “as a means of reinforcing the pedestrian realm.” Indeed, asphalt over brick looks terrible and prioritizes automobiles as they drive over sidewalks.

Constructing brick driveway aprons takes the work of a specially skilled mason. Tony Aceto, the President of Maineway Landscaping, has done, he tells me, “80 percent of Portland’s new sidewalks.” He noted the various ADA requirements for driveways and the methods of laying bricks. “They are stronger when laid on their side,” he explained, “and I’ve done sidewalks and drives where the bricks stand on their ends.”

KICKING AGAINST THE BRICKS

Just as a concrete building isn't inherently better than a brick building, the same holds true for sidewalks. Concrete is a wonderfully versatile material, and brick is essential to the character of much of Portland and holds up well in harsh conditions. Ultimately, what matters most is the context, budget, quality of installation, and maintenance.

If we do continue the piecemeal change from brick to concrete, we’ll only be trading broken-up brick sidewalks for broken-up concrete ones, and then bemoaning the loss of historic character.