Shelters in the Air(bnb): A modest counterproposal to the city’s shelter problem

The emergency homeless shelter relocation question is a LULU of an issue (which, in city planning-speak, stands for Locally Unwanted Land Use).

The current Portland shelter on Oxford Street is housed in a converted garage that is overcrowded and physically inadequate. As a result, collateral issues like mental illness and drugs have spilled out into the surrounding streets. The area around the shelter is a Hogarthian dystopia. It is no secret that, reasonably enough, neighbors, businesses, and Belinda Ray, the District 1 Councilor, want the shelter gone.

But where to put it? Neighborhoods have not been lining up to get a massive homeless shelter/ social service center. After much deliberation the City Manager’s recommendation is to site an attractive, new, purpose-built two-hundred bed shelter near Nason’s Corner and adjacent to the Barron Center which is just off outer Brighton Avenue, close to the Westbrook town line. It would be one of the largest shelters in New England; a sort of shelter Supercenter (much of the city’s argument for improved services rests on architectural determinism associated with an improved facility). Nason’s Corner neighbors are not happy.

Although the matter is complex, much of the issue comes down to the question of centralization vs. decentralization. Those who support a centralized approach (i.e., a single shelter) have at least one eye on operational costs.

A decentralized, or “scattered,” approach is preferred by some homeless advocates and community leaders because the services can be more personalized and the impact on neighborhoods diluted. A decentralized approach might be made to be more cost effective if the construction costs are mitigated; like if a facility is already extant. Fortunately, such an inventory of suitable housing does exist. It is called the short-term rental or Airbnb market. 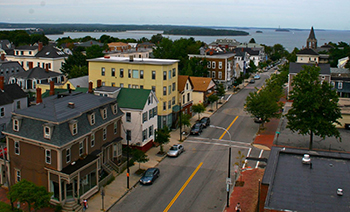 Should the city of Portland consider the approach of enlisting short-term rentals as emergency shelter/transitional housing by eminent domain, it would be on strong negotiating ground. For starters, there is the 2005 Supreme Court ruling Kelo vs. City of New London, wherein the court found that a municipal government may condemn private homes for purposes of economic development. Unlike the case of New London, the homes will not be demolished but merely condemned on a temporary or ad hoc basis. It would be likewise be difficult for homeowners to argue Fourth Amendment rights. By participating in short-term rental services like Airbnb they have already ceded their privacy by publicizing their homes on the internet and participating in a public forum of user reviews. (Generally house guests don’t publicly “rate” their stays with their hosts, nor do hotels publicly review their guests — thank God).

The advantages to such an approach are many:

If there is a need for a purpose-built city shelter, it could be significantly smaller than two-hundred beds. As a significant portion of people seeking services come from surrounding towns that don’t officer shelter services, Airbnbs should likewise be enlisted into service in Westbrook, Scarborough, Falmouth, Buxton, Falmouth, Cornish, etc. Because if you lose your housing, you should still be able to continue to live in the community where you have roots and connections.

The real obstacle appears to be political, as many self-styled innkeepers would be likely to raise objections. Of the five district Councilors, not unexpectedly, only Brian Batson from the affected District 3 has taken a public position against the proposed location. If, however, neighborhood opposition can levy enough pressure on the three At-Large Councilors and the Mayor, then that would be enough to tip the scale right there.

As further incentive, the city should exempt anyone who agrees to convert their Airbnb unit into a full-time, long-term rental, whether it be a bedroom, apartment, or house. Naturally, if enough people return their short-term rentals to the full-time market, we might not have such a problem with homelessness in the first place. While hosts might not make as much money, it would give them steady income and they wouldn’t have to restock their Keurig machines.