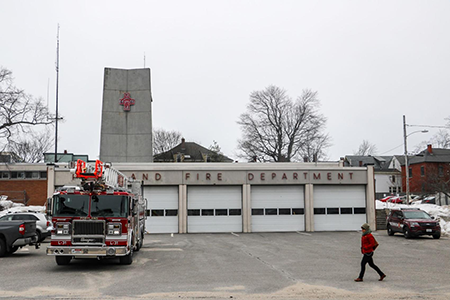 Most folks these days find Cold War culture rather quaint. Civil defense, Khrushchev’s shoe, and fall-out shelters are consanguine with beehive hairdos, mini-skirts, and the hula-hoop. But thanks to the big button on the President’s desk, fear of nuclear war is making a comeback.

Back in the 1960s the Soviet Union had fewer than 10,000 nuclear warheads, all of relatively moderate power. So it made a certain amount of sense for municipalities across the country to build, designate, and provision sites as fallout shelters in case of nuclear attack.

Portland’s Bramhall Fire Station on Congress Street is one such location. Its functionalist Brutalist structure, large parking lot, and invisible walk-in entrances are typical of ‘60s architecture. The site, carved into the hill on the West End, is ideal for a bomb shelter. Tucked in the back of the building, the bunker is entirely earth-covered and protected by thick blast walls of concrete and lead. An emergency generator would supply power and there were plenty of phone lines (don’t even think of relying on a cell phone in a nuclear attack).

But by 1985, the Soviet nuclear stockpile had grown to nearly 40,000 missiles of greater potency. Civil defense (as it was known) had fallen by the wayside and it was determined that trying to protect the US population (currently over 320 million) would be impossible. Today, if there is a nuclear attack, the American Government’s preparedness plan is as follows:

You’re on your own, bub. 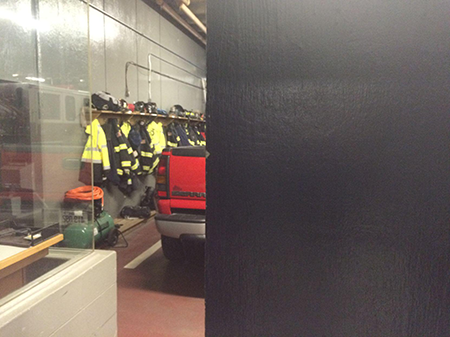 According to Portland Fire Chief David Jackson, the Bramhall bunker could accommodate a number of people for a few days. Jackson seemed to suggest that folks would be welcome (provided that there would be anyone home in the station at the time, the firefighters might all be out responding to emergency calls). If you are interested in taking refuge you should arrive early and BYO survival kit: Food, water, bedding, and medications because the bunker is stocked with little that is essential — its current use is as a classroom and weight gym. (Prepper Tip: Save room in your go-bag, learn how to open tins with a Bowie knife instead of a can opener.)

Whether you decide to evacuate (you think rush hour traffic is bad now?) or stay put, it is important to have a plan. In either case, one should consider how to survive in a basement for an extended period. In addition to a rotating a supply of food and water, the kit should have a battery-operated radio/walkie-talkies (TV and satellite signals will be dead), a generator, and a way to stay sane. I’m not sure what one is to do about fashioning a toilet — perhaps a sump hole?

Bramhall isn’t the only bomb shelter in town. The basement of the Portland Expo was outfitted as a fallout shelter and there are many others. If you look for masonry or concrete public buildings (schools, libraries, etc.) built between 1950 and 1980, there's decent possibility that it has an underground bunker. You might even find some expired cans of food and drinking water.

Government programs like CERT generally advise citizens to “shelter in place,” which is another way of saying that they don’t want to be responsible for providing shelter and logistics. However, shopping malls are well-provisioned, have good access routes, generators, space for helicopter landings, and plenty of parking. Government agencies like FEMA and Homeland Security scoff at using malls as shelters — not on practical grounds but so as not to interfere with “continuity of business.” (Capitalism is a value system as much as it is an economic one.)

So if you evacuate to the Mall, don’t expect a warm reception from the Chamber of Commerce. But bring a good heavy hammer. In case of an emergency you may need to break glass.