A somwhat random selection of tips, tricks, and opinions on bikes and cycling. 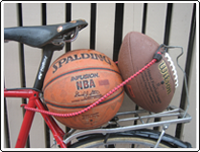 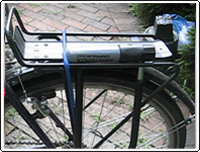 I'm a fan of mountain racks because U-locks drop right into them, but for sheer ease of carrying capacity, the old Pletscher Classic rack with the mousetrap spring work best if you reinforce the spring with a bungy cord. By hooking the bungy to one side of the clamp and then bringing around either the seatpost or the top tube/seat tube junction and then to the other side of the clamp. This not only keeps the camp tensioned it also secures sideways load shift. I've carried huge loads in this way, and the rack is rated for 55lbs.

Headlamp
I've just about had it with bright halogen headlamps, especially the helmet mounted kind. In cities, there is no need for headlights that illuminate the road, there is enough light to see your way. It is useful to have lights that make you visible to drivers, but those require much less wattage. The problem is that passing someone with one of these helmet-mounted lights is like having a car shine its bright high-beams at you: not only is it blinding but it completely obscures whatever or whoever is behind. What's more, I'm not sure that an illuminated a patch helps the rider's visibility overall as it effectively darkens everything else. Besides they are dorky.

Front Baskets and Bags
Uneccessary. Front baskets are great but I carry bags by looping them over the stem. I've carried backpacks, multiple bags of groceries, and just about anything with a handle. The trick is to keep the bags off the front wheel as the tire will rip a hole in the bottom pretty quickly. A front fender is helpful. 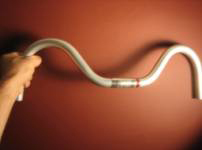 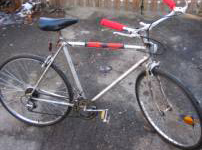 Nitto Moustache bars are promulgated by Rivendell Bicycles as citybike handlebars that can be used for longer road riding and vica-versa. The idea is that the sweep-back allows for upright cruiser-style riding while the curves allow for multiple hand possessions and more aggressive postures. All well and good but the Nitto Moustache bars don't measure up to the promise. The sweep back is not as far as typical cruiser or North Road bars, nor do they enable you to place your hands next to the stem clap – which gives essentially two hand positions (at the ends and at the curves). What is more, the bars drop down as they sweep back which I find uncomfortable. I have a set of moustache-type bars made by 3ttt which, that are not only flat but have space for hands on other side of the clamp which gives a third (tertiery) hand position. What is more, they accept road levers which Nitto Moustache bars do (but the Jitensha flat bars don't, unfortunately). Luckily, regular cheap-o, steel Northroad bars accept road levers, and have space by the clamp for a third hand position, I don't think they accept bar-end shifters which is nice for road bikes.

Rivendell suggests attaching a dummy road clamp (brake hood) on either side of the clamp to give a third hand position, to which I say "if my grandmother had wheels she would be a trolley car.” I was bemoaning moustache bars to a friend in a bikeshop when someone walked in with asset on his bike, someone asked "where do you put your hands, to which he replied "anywhere you want.” Exactly.

Fixed-gear, 3 speed, and various older bikes don't have a quick release rear wheel, if you get a flat you will need a 15mm (or sometimes 14mm) wrench. A 15mm is not hard to find but they are a bit long for a tool kit so some companies like Surly makes a short-handled purpose built tool which Harris cyclery sells for about $26. This seems a bit pricey and since I know how to open beer bottles with a cigarette lighter or any piece of flattish metal, the tip of a spoon works well (grip the bottle tightly around the neck, use the first segment of your forefinger as a fulcrum and the lighter as a lever, squeeze the bottle neck as you pry and the top should pop-off). Anyway the stubby wrench with the box end (from Sears) is great quality for about ten bucks. The red tool (top left) has 14 & 15mm box wrenches and a pedal wrench on the other end. It is good for BB bolts, old seat tube clamps, and seat clamps and also costs about ten-twelve bucks.

How to Build a Bike
Building a bike is a rewarding but costly endeavor. People have been known to stockpile parts for a year before being ready to build. Even using mid range components the price comes to over a thousand dollars. Better is to buy a decent complete bike and upgrade the parts piecemeal, at which point (or anytime within) the components can be switched over to a new (or at least new to you) frame. Buying parts can be costly, but keep in mind that weight matters most on things that rotate: wheels, crank, and pedals so those parts are worthy of greater investment. Another group of parts to choose carefully is the points of human interface: seat, handlebars (incl. stem), and pedals; these should be chosen with comfort in mind (note that pedals are in both groups). The rest of the bike, brakes and derailleurs you just want to work.