Journalism: Food : Moscow on the Presumpscott

Off the Eatin' Path
By Zachary Barowitz 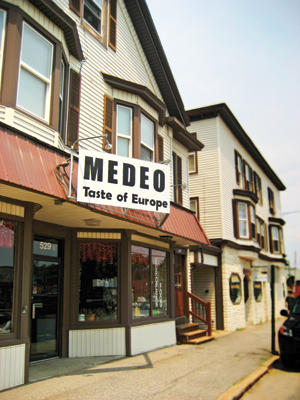 Let’s face it: we make some culinary concessions by living in Maine. The old Yankee hand can be felt, or tasted, even in ethnic foods. We have bagels that taste like joint compound, Chinese menus unchanged since the Eisenhower era, and, despite the best efforts of a few would-be artisans, cheesy wedges of flat dough that look an awful lot like pizza, but taste like awful pizza.

Which is why I say thank goodness for global economic collapse, rising nationalism and porous borders, because if it weren’t for the immigrants those problems bring here, I might starve.

Medeo European Food & Deli is, literally, a godsend. Owner Luba Gorelov is a fourth-generation Russian Baptist who left Kazakhstan with her family when, in a surge of national pride, certain demographic elements were told [rough translation]: “You don’t have to go home, but you can’t stay here.” Gorelov learned how to emigrate to America from a flyer passed out at her church back in Alma-Ata. The Gorelovas are members of the Russian Baptist congregation in Gorham whose church suppers supporting youth missions to orphanages in Belarus are legendary.

Medeo sells Russian — which is to say, post-Soviet: Slavic, Turkish, Baltic, Caucasian, etc. — food and goods. Inside this small store in Westbrook you can find just about anything you’d expect to come across on a trip to Brighton Beach — or, I suspect, St. Petersburg. Looking for seaberry juice? They have it. Hungarian salami? Yup. A two-ounce jar of Paddlefish caviar for fifty bucks? Sure. Balkan cheeses, pollock roe, pure black currant juice, real rye bread, kefir and Kewpie mayonnaise? You bet. Russian dolls and magazines, samovars, wool vests and slippers and an herbal pharmacy with badger-fat capsules (for lung ailments) and birch water? Yes. Affirmative. You got it!

Medeo could be considered a Slavic delicatessen. Delicatessen is a German compound word meaning “delicate food” — thus our term delicacies. But whereas the concept once referred to refined tastes (raw beef, quail eggs, truffles), the word delicatessen has somehow transmogrified to connote sauerkraut, mustard and meat sweats. This bears mentioning because Medeo, with a few notable exceptions, is not a place for low-tasters — nor, for that matter, the squeamish.

Of the several types of smoked fish available, my tasting team and I first tried the salmon bellies. The fatty strips burst with each bite, in the manner of fresh salmon caviar, but whereas caviar has a clean taste and snap, the canned bellies we sampled were mushy and slightly bitter. The smoked mackerel comes whole, in two styles: regular (sold unwrapped) or spicy (wrapped in plastic). The former was a big hit at a brunch party; the latter was mushy and tasted spoiled. The real find was the German-made Maatjesharing (“maiden herring”), also known as soused or schmaltz (fat) herring. This is the young fish, lightly brined, cured with enzymes and filleted. It’s oilier and less salty than other herrings, which results in a rich flavor and natural creaminess. Maatjesharing is a popular street food in northern Europe, where people eat it on soft dinner rolls with minced or finely sliced onions. It also goes well with boiled potatoes. 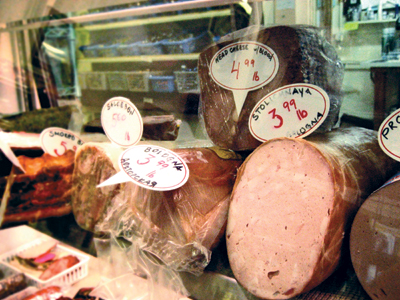 On the other side of the register are the cured meats. Our tasters raved about the kielbasas, which can be served grilled, boiled or cold. There is an excellent German (“Alexander”) salami reminiscent of capicola; a good dry-beef, “Jewish” salami with a softer, deep pink interior; a smoky pork-belly that, when thinly sliced, melts in your mouth like butter; and an alarmingly elongated, smoked half-chicken in a vacuum seal.

Medeo sells several varieties of canned ground pork. These products tend not to have the pink uniformity of Spam; rather, they are coarse, even chunky — more like pork meatloaf or country pâté. The Army Brand Pork Pattie Loaf (sold in a camouflaged can) took me back to childhood lunches of deviled ham. (The pig depicted on the label of another brand bears a striking resemblance to Babe the Gallant Pig; the basic design of a third makes it look like a prop from Repo Man.) The canned headcheese has large hunks of head meat suspended in the telltale amber pork-jelly in which it was cooked. While we found all the canned pork palatable when spread on bread with some mustard, the best application is in Italian gravy — the aspic and congealed fat enrich the tomato sauce, and the meat gets more tender and succulent.

In addition to the cured and the canned, Medeo offers frozen meat, but the selection is limited to liver, whole rabbit and beef tongue. 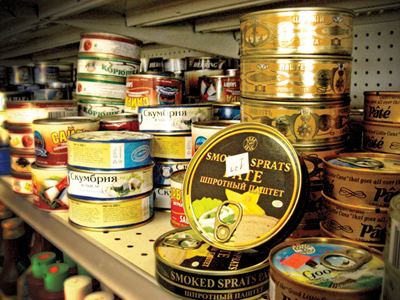 Near the canned pork is the cod liver, or foie de morue (if that makes it sound more appealing). Unlike most canned fish products, it does not taste fishy; the appearance and flavor are similar to monkfish liver and not far from foie gras or a mousse pâté. In terms of mouth-feel, foie gras is more buttery, but I find the flavor of the cod liver rustically sumptuous. Preparation styles vary. I eat it the European way: on toast, sometimes with marinated onions. The Japanese season monkfish liver with ponzu sauce (soy sauce with citrus) and garnish with shredded daikon mixed with a little red pepper, which wakes up the flavor of cod liver, too. An avant-garde preparation calls for combining it with bittersweet dark chocolate, which sounds OK, but reminds me of my mom’s story about crying on her honeymoon in France when she bit into a buttery croissant and found an anchovy inside.

Gorelov makes two salads: a Korean Cabbage salad (Uzbek kimchi) and a long-strand shredded-carrot salad. Beneath the salads are some superbly crunchy and delicately seasoned half-sour pickles. One of our tasters, Mary, refused to try them, citing a general distaste for pickles as a species. She called the next day with the fervor of a convert: “I never imagined a pickle could be so good! It’s like biting into a fresh cucumber!”

In the freezer case you’ll find a wide selection of “Russian ravioli.” The chicken and potato pierogi tasted something like a cross between a wonton and a tortellini. Neither were any better than the cheaper pierogi sold at Save-A-Lot. [See the Fall 2007 issue of The Bollard for more on those.]

Among the Eastern European specialties in the canned goods section are several varieties of mushrooms. I worked many years ago as a counselor at a summer camp somewhere in Bohemia. A favorite activity at such places was to let the kids run off in the forest to hunt mushrooms, which they found in abundance (I couldn’t find a single one). Once back in the bunkhouse, they’d pull out their pocketknives, slice the ’shrooms and sun-dry them on sheets of newspaper. Medeo has several types of mushrooms sold in jars. Their delicate flavor, viscous texture and creamy consistency suggest a fungal sushi. By far the best deal is the 100-ounce can of oyster mushrooms for $10. As per the instructions on the can, I re-canned them with crushed garlic, peppercorns, bay leaves and vinegar. The remaining ones got thrown in a chicken soup.

Toward the back of the store you’ll discover what must be the only export-food from the Autonomous Republic of Bashkortostan, an oil-rich state in the southern Urals. Bashkirian honey is a richly flavored, raw, unfiltered honey that can be cut into chunks and eaten like maple-sugar candy. The numerous fruit preserves at Medeo include a rose-petal preserve (great on vanilla ice cream), rolled orange peels in heavy syrup (good in cocktails), preserved wedges of quince (good in oatmeal), and preserved Morello cherries (good in all of the above). 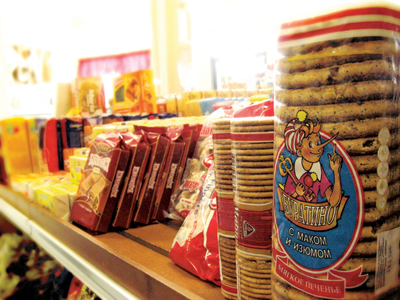 Although they can’t match the refinement of the French, the richness of the Belgian, or the delicacy of the Swiss varieties, Eastern Europeans do chocolates pretty well, especially wafers and chocolate-covered jellies. The huge selection of loose candy at Medeo ranges from $4-$7 per pound. Although the more expensive chocolates (mostly nut-flavored and Polish) tasted “better,” the cheap chocolates were arguably just as good. The chocolate-covered marzipan stands out, as do the tiny, fruit-flavored (peach and black currant) hard candies from Poland, which are similar to small Italian candies. The cork-shaped milk chocolate in red foil might be likened to an old candy store favorite: the “ice cube.” Other notable confections include the excellent chocolate-covered fruit, gel-topped cookies, “souvenir” Moldovan gingerbread, and soft spongy cakes, imported from Brooklyn, with a lot of fruit and cream.

That these last confections make their way up from New York is of little remark compared to the origins of many other products available at Medeo. The fractured empire of the Russian Federation was a vast and diverse sociopolitical conglomeration that stretched from Turkey to Alaska. Medeo exhibits the curious artifacts of that globe-spanning country’s tastes: “Georgian Sauce,” a brown sort of ketchup made from sour plums (product of Bulgaria); Indian instant coffee (from Latvia); canned goulash (Australia); canned mushrooms, cod liver and mechanically separated pork with Cyrillic labels (Israel, Norway and Canada, respectively); roast beef in gravy, with a cherubic Russian peasant on the label (a product of Brazil); bags of tea with the visages of favorite Tsars and Tsarinas (products of Sri Lanka).

They even sell Maya’s honey, from a bizarre and confounding city called Augusta.