It's a Fangtastic Life 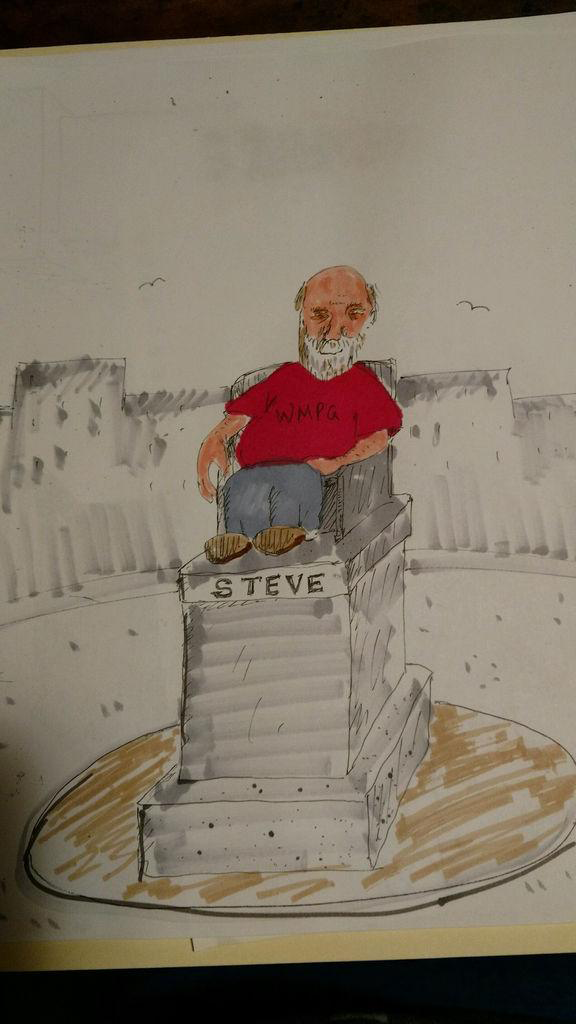 I met Steve Hirshon for coffee one day and, being that the weather was nice, we took our drinks to go and milled about Monument Square. In the course of our 20-minute walk Steve must have said hello to over 60 people. It was an impressive display even by Portland standards, but it wasn’t surprising.

Steve (‘Fang” to his oldest friends) worked in Monument Square. And he grew up in Portland (President of his class at Deering High). And he and Collette (his “co-mortgagee”) always seemed to be at any party I ever was at. And he was a WMPG DJ for 35 years. And he was ever present in the activist, finance, immigrant rights, bike-ped advocacy, arts, and Jewish communities — and I’m probably leaving several things out.

Steve died a couple weeks ago. In addition to losing a friend and a loved one, Portland lost a great store of knowledge and a prescient mind.

Several years back, Steve was kind enough give me a few guest minutes on his WMPG show, “Hukkin’ a Chainek” – a Yiddish phrase that gets translated differently every time I hear it – to talk about food. I’d bring in an obscure and entirely un-breakfasty foodstuff, often a marginally edible organ from a negligibly edible beast (Steve was never fazed by any dish — I think he was just grateful for the snack) and we’d chew through the live spot that consisted mostly of us talking with our mouths full. On one such morning, Steve had had a planned guest from USM’s Muskie School stand him up on the show (I can’t for the life of me remember who it was). Not one to hold back when his emotions ran high, Steve went off on a terrific rant. He blasted his no-show guest, the University (who held the license for the radio station), and most of all the Muskie School of Public Service, which he called “the Muskie School of Self-Service.” Flash forward to this past November. Muskie co-sponsored an event to launch their most recent rehash of a less-than-insightful report on how to grow Portland. Their major recommendation? Fund the Muskie School to study the problem. Steve was right for not holding back on the self-serving academic.

More recently, Steve called me up after he had seen a letter to the editor that I had written about the fatal police shooting of an African American man, Chance David Baker, who was waving what turned out to be a BB gun. Steve wanted to let me know that the victim was known in his neighborhood for displaying some serious mental health symptoms, so much so that a neighbor had met with Chief Sauschuck of the Portland Police Department. Unfortunately the mental health memo did not reach Sgt. Nicholas Goodman in time before the fatal shot. The investigation is still ongoing.

Steve’s head was a repository for the social history of Portland over the last 50-plus years. Not only did he attend nearly every type of civic meeting, but he had a rich anecdotal social history – especially of ‘60s and ‘70s counterculture. My partner called him Portland’s original hipster.

It was that vast knowledge that I was tapping into on our lunchtime walk. I was gathering background information on a documentary that I was planning on the history of Jewish Mercantile Portland. “This is a great topic and it could develop into a movie,” Steve said. “Or it could just become a really nice Bollard article.” (The latter turned out to be the case.) One of his anecdotes that made it into the Bollard story was about a clothing manufacturer, Si Glazer, who got a contract to make t-shirts for prison inmates. The order was for mediums, but Si had a lot of small shirts on hand, so he tore out the labels that read “small” and replaced them with labels for mediums.

If Steve had any objections to my cribbing his stories for the article, he never expressed them to me. I honestly think he was just happy to get the stories out there. This was an era of Portland that deserves some nostalgia: A diverse economy, a booming population of 70+ thousand people, and a bustling peninsula that resembled a real downtown: men in overcoats and fedoras within a diverse city scape that included kosher bakeries, butchers, restaurants.

Sadly, that era is gone. And now so is Steve.