Off the Eatin' Path
By Zachary Barowitz 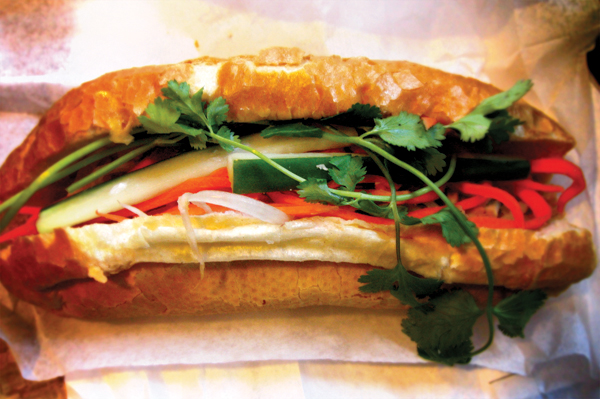 Owner Kim Tran has lived in Portland since 1979. She recently retired from a customer service position at Central Maine Power, where her gregariousness undoubtedly served both her and the company well. Tran opened Kim’s Gift Shop several years ago on St. John Street, and added the café last spring because, as she put it, “I like people and am still healthy.”

Before Kim’s café, the only Vietnamese sandwiches available in Portland were pre-made in Boston and sold in Southeast Asian markets like Makot Pech. “I’d buy 15 and freeze them,” said Tran, who used to make the trek to Beantown and back for her personal fix. The sandwiches are not offered in any of the Vietnamese-owned restaurants I know of, which seem to focus (inexplicably) on a generally lackluster version of Thai food, instead.

Similar in principle to our beloved Italian, in that it combines meat, veggies, and other somewhat outré ingredients, the Vietnamese sandwich (bánh mì) is poised to break into mainstream American sandwich culture. Unlike the ubiquitous panini (now available at McDonald’s) or the increasingly bastardized cubano, Vietnamese sandwiches feature fresh ingredients and are not swathed in fat for grilling.

Vietnamese sandwiches have a number of distinctive characteristics. First of all, the bread — from which the name bánh mì derives — is made with rice flour and wheat. It’s soft, but toasted at preparation time to create the crisp crust and soft crumb of a traditional baguette. The julienned carrots and daikon are marinated overnight in vinegar and sugar. The mayonnaise should be eggy (Kim’s is homemade and contains a little garlic powder). The fresh vegetables are cucumber, onion, cilantro, and sliced hot pepper (Kim’s uses jalapeños, though the spicier and less pithy Thai pepper, which is smaller and more difficult to slice, is preferable).

Although bánh mì have been known to include everything from scrambled eggs to sardines, the most popular combination is liver påté, pork-roll and two varieties of headcheese (boiled hog’s head in which the loose meat is suspended in the congealed broth, forming an aspic that’s then sliced like deli meat). Other recommended varieties include meatball (tastes like a Southeast Asian hamburger) and shredded tofu. Most sandwiches at Kim’s cost $2.75.

Bánh mì is an example of fusion cuisine, a byproduct of France’s colonial sojourn in Vietnam. The term “Vietnamese sandwich” is an American appellation, similar to “Cuban sandwich” (known in Cuba as “a sandwich”) or “French fries” (known in France as “fries”). Tran calls bánh mì “French sandwiches,” and sometimes “Paris sandwiches.”

The selection of sausages includes individually wrapped cubes of pork, covered with daikon and chili, that have lots of crunchy, stringy tendon inside. The café also offers a banana leaf–wrapped tetrahedron of sticky rice, meat, and surprises (microwave these for about two-and-a-half minutes, or until soft and steamy), as well as various buns and noodles shipped up from Boston. 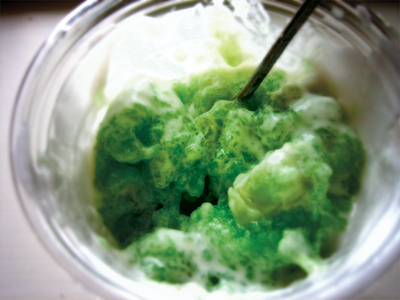 Desserts include avocado shakes, made with half-and-half and ice cream, that might be likened to very cold supermarket guacamole. There’s tapioca cake, which is somewhere between bread pudding and sweet potato pie, and not overly sweet. The cooked banana encased in sticky rice, like a tamale, has a chewy, glutinous texture. It must be served warm, to soften the rice, and comes with coconut milk as a dipping sauce.

Asian desserts often come in bright colors, as the trio of coconut milk sticky-rice desserts (chè) available at Kim’s attest. You can get taro (a bright green variety, flavored with pandan; pictured above), corn kernels, or black-eyed peas. These desserts are traditionally served hot (but can be eaten cold) and may be likened to oatmeal, Indian pudding, rice pudding, or a crustless southern bean-pie in a plastic drink cup.

There’s also a decent selection of Asian drinks at Kim’s. The back of the store has a Chinatown-style selection of Vietnamese CDs, DVDs and “designer” t-shirts.

A century ago, Giovanni Amato’s combination of salami, cheese, veggies and oil was a revelation to hungry Portlanders. At the dawn of this century, Kim Tran’s combination of daikon, headcheese and hot peppers is ready to do the same.