A friend — I’ll call her Florence — would have represented her country in the 1956 Olympics were it not for the psycho-physical phenomenon known as optical flow.

As the story goes, Florence placed out of the money in a qualifier of the women’s 100-yard dash on the day of the race. However, a photo in the next day’s newspaper clearly showed her breaking the tape ahead of the field. Flo beat out the competition but lost to kinematics: The finish line judge had his eyes fixed on the far outside lane — he did not see Flo blur right past him on the inside. 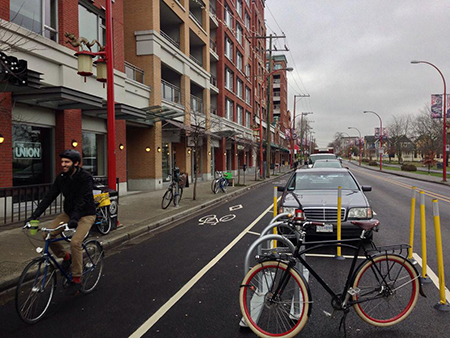 A parking-buffered bike lane in Vancouver

Optical flow is the way that we perceive speed and distance. It is what makes road signs whiz by, but distant mountains appear relatively static. The determinants of optical flow are distance and angle. Think of the sensation of a road sign ‘speeding’ up the closer you get to it, until it becomes just a flash in your peripheral vision.

Optical flow is also what makes the new parking-buffered bike lane on Park Avenue an unfortunate failure. (“Parking-buffered” means that the bike lane sits between the parked cars and the curb). Although this style is used widely elsewhere, it is the first one in Maine. The new configuration is at the behest of District Two Councilor Spencer Thibodeau and his $100,000 allowance from the capital improvement budget.

The problem with the location of the new parking-buffered bike lane is driveways. There are 27 of them on the six-block stretch and 14 in the two blocks from Weymouth Street to Mellen Street. A general criticism of bike lanes it that some can give a false sense of safety — this is a case in point. Cyclists are lulled into feeling safe, when actually they need to be hyper-vigilant of mid-block driveways and the motorists who pull in and out of them. Moreover, motorists may have a hard time seeing cyclists due to optical flow (e.g., looking in the wrong place) as well as the fact that they are hidden behind the parked cars. Worse yet, the parked cars and short buffer zones (to allow for more parking spaces) obstruct the cyclists’ vision, obliging riders to continuously swivel their heads between the driveways and the roadway. Westbound (along the park) is quite a bit safer, but it still feels like a solution in search of a problem.

The new design raises other concerns, such as left turns, bus conflicts, and whether snow and debris can be cleared adequately — especially to avoid ice build-up over winter.

I and other regular bike commuters rated Park Avenue as a very good bike route before the re-striping took place (I’ve ridden the route hundreds of times). So when the proposal came to the attention of the Portland Bicycle Pedestrian Committee (of which I was Chair at the time), it met with a fair amount of skepticism and debate. Two main concerns were: Why is the lane being put there? And, why not put the $100,000 to more pressing needs such as another sidewalk snow plow?

Ultimately however, the bike-ped committee did give the project our support on the basis that A) Not everyone feels comfortable riding in traffic and B) The lane can be used as a ‘demonstration project’ to paint the way toward more innovative bicycle infrastructure. (Proof of concept would be if bicycle ridership increased dramatically along the route.)

On my inaugural ride, I was uncomfortable almost immediately, constantly having to look both ways as I approached each driveway — which I had never noticed when the bike lane was further out in the roadway. (The parking-buffered lanes that I’ve ridden elsewhere do not have any driveways.) No sooner did I pull back into the road than someone from a car yelled “get into your lane!”

In fairness, I had not raised the driveway concern when I saw the engineering plans. And I cannot recall any discussion of the impact of so many driveways. However, if I had a re-do (like in a year when the paint is worn off), I would recommend that the eastbound bike lane be put further out in the roadway as is more conventional.

Maybe that is just part of the learning curve for a project like this, but in retrospect, the city should have left well enough alone. Sometimes it is difficult to see what is right in front of your face.